Col. Anthony L. Wilson, 1CDSB commander, presiding over the ceremony, made sure to recognize the Soldiers arrayed across the field in formation behind the brigade colors, held by the 1st Cavalry Division Honor Guard.

“These amazing young men and women standing in formation represent over 1400 Soldiers of the Wagonmaster Brigade…to include those Soldiers currently deployed in seven countries worldwide,” said Wilson. “All stand ready to deploy, fight, and sustain the 1st Cavalry Division…or any combatant commander’s requirements.”

The change of responsibility is a relatively simple ceremony, highlighted by Meurer passing the brigade colors to Wilson, who in turn passed them to Williams, representing her assuming responsibility for the brigade and its Soldiers.

the Brigade Colors for the last time,” said Wilson. “Thank you for your leadership, your loyalty, and your professionalism. The 1st Cavalry Division Sustainment Brigade is a better organization because of you.”

Meurer first joined the Army in 1992. His first stint was spent as a quartermaster at Fort Bragg, North Carolina, and concluded in 1995. He then left the Army and joined the U.S. Navy Reserves. Meurer had returned home to Tampa, and his reserve weekends were spent at Naval Air Station Jacksonville.

“That’s when me and my wife got married, and we found out we were getting ready to have a baby…so I said I’m going back to active duty, but I wasn’t going to go active duty Navy and be stuck out on a ship, so, boom, I got sent right back to Fort Bragg, because I was already airborne qualified,” said Meurer. “So I’m married and I have a baby, and I say I’d better get my act together. I’m sitting around on Bragg and there’s Special (Operations). They say ‘hey, we’ve got this briefing for Special Ops support people,’ but I’m on head count in the dining facility, the same time the briefing was, so I say to my wife, ‘can you please go to this briefing for me, and get the packet, get the info, sign my name, all that stuff?'”

Melinda Meurer went to the briefing, about three months pregnant with their son Jared. Their daughter Brooke was two. All were in attendance at Cooper Field 23 years later, along with daughter Abby, and grandson Nolan. A rider on horseback from the 1st Cavalry Division Horse Cavalry Detachment thanked Melinda with a bouquet of red roses, and she in turn thanked the horse with a basket full of carrots.

“So they were real nice to her…down at the bottom it listed all the shortage MOSes, and there it was, 92 Yankee. Shortage MOS, we need ’em,” said Meurer.

Meurer’s packet went through in only a few days.

He continued, “He calls me up, says ‘Hey man, congratulations, you’ve been selected…we’ve got one problem though. Did you know you’re on orders to Korea?’ I said, ‘Well, I do now.'”

Meurer spent the next year at Camp Page, South Korea. “But I already had pinpoint orders back to Special Ops,” Meurer said.

“You’re doing great stuff,” a mentor told him, “but if you ever want to be a command sergeant major, you’ve got to do a little bit more big Army stuff.”

His next move wouldn’t become clear until Meurer visited Human Resources Command, Fort Knox, Kentucky. Informed by his branch manager that he would likely be sent to Fort Drum, Meurer, a Florida native, said he would rather not. Fortunately, there was also an Inspector General position available at the Pentagon, in part because its strenuous background check made it difficult to fill. As a Special Operations Soldier, this would not be the first background check Meurer would pass. After two years at the Pentagon Meurer was promoted to Sergeant Major. His final two stops would be Hawaii…and Fort Hood.

“For the last 30 months it has been my distinct pleasure and honor to be assigned to this historic division and to watch the troopers of the sustainment brigade fix, fuel, arm, man, transport and sustain our brothers and sisters from across the corps,” Meurer addressed the crowd. “Live the Legend, Wagonmaster Proud, Wagonmaster Nine signing off.”

“I wish you and Melinda the absolute best in your next chapter,” said Wilson. “It is my hope that your canoe sails smoothly, and the fish will always bite wherever you place your fishing pole.”

“In appropriate Army fashion, as we say farewell…we welcome another. Today, the 1CDSB is happy to welcome Command Sgt. Maj. Williams,” said Wilson. “Command Sgt. Maj. Williams has a Soldier’s pedigree and a reputation as a calm and thoughtful leader, with high standards and expectations. We couldn’t have asked for a more qualified non-commissioned officer to join the Wagonmasters.”

‘There is nobody else I would want to be deployed with’ 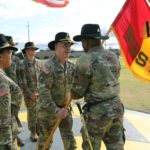 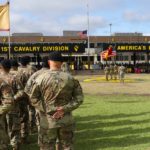 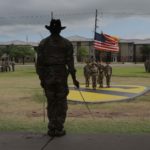 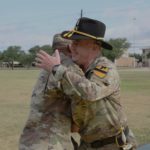 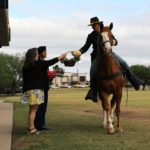