“This is our largest commissioning class so far,” Capt. Thom Souza, assistant military professor at TAMU-CT, said, “since the university started here in Central Texas (in 2009).”

Not only was it the largest class, Souza said it was his best.

“It’s one of our most decorated classes with over 50% earning ‘Distinguished Military Graduate,’ at Cadet Summer Training at Fort Knox, (Kentucky),” he added. “Two of them are top ten in the nation.

“Every single one of them are high performers,” Souza continued, “and that’s what we get here with our population, where the majority are prior service, ADO (active-duty option) cadets.”

Souza has been an assistant military professor at TAMU-CT since the fall of 2019. This class is special to him, and not just for their performance. It is his last class of cadets as he moves onto a new assignment.

“It’s great to be able to influence and coach and develop young leaders,” he said. “Even as a commander, I didn’t have this many young, junior leaders to lead and mentor. It’s an absolutely awesome opportunity.”

Souza spent his final year working mostly with TAMU-CT’s junior class, while his colleague Maj. Kyle Surridge focused on the graduating class who are now lieutenants in the Army. He echoed Souza’s sentiments.

“This is terrific,” he said. “This is one of the best Army assignments I’ve had in 15 years. It’s extremely fulfilling to see these young cadets as they transition through the process and now to see them go back out into the active force. It’s extremely rewarding.”

U.S. Army Garrison – Fort Hood Commander Col. Chad R. Foster was the guest speaker at the event, which he called an honor and privilege.

“From a larger perspective,” Foster said, “while it’s life-changing for them (the cadets), this is a strategic investment for our Army, and Fort Hood plays a key role in that. Any time that we can be out here and support events like this, to show their importance not just to us, but to our Army and our nation. This is something we have to do, and it’s a pleasure to be here and be part of that.”

To the cadets, the garrison commander reminded the soon-to-be junior Army leaders to remember to “invest in your people,” even as they continue to invest in themselves and improve and enhance their own careers.

Following Foster’s remarks, the promotion order for all 19 new lieutenants was read. Then, one-by-one, the cadets ascended the stairs to the stage, where they first received their commissioning proclamation from Foster and then family members pinned on their new rank. Their first salute followed, as each cadet presented a traditional silver dollar to the person who rendered it.

“I have three sons and this is my baby,” Andre, a Desert Storm veteran who served on the battleship USS Missouri (BB-63), said. “It’s a blessing (to be here), an honor and it got me moved. I’m just so thankful to be here.”

The paths of these new officers to reach this momentous day differ widely. For example, 2nd Lt. Desiree Martir joined the Army in Puerto Rico just 18 months ago.

“I was junior enlisted. When I came into the (ADO) program, I didn’t know anything about the Army itself,” Martir, who joins the active Army as a military intelligence officer, said. “I learned a lot with my fellow cadets, second lieutenants today, and it was a really good experience. I recommend it to everybody.”

By contrast, newly-minted 2nd Lt. Timothy Duyst joined the program as a cavalry scout from the 3rd Cavalry Regiment. Duyst, a seven-year Army combat veteran, came into the ROTC program as a staff sergeant.

“I joined from the bottom,” Duyst, who previously served in Iraq with the Brave Rifles, said. “I wanted to lead, but I wanted to be able to lead as a more effective leader. I thought (that) coming from the enlisted side to the officer side would make me a more well-rounded leader.”

No matter how they arrived at this day, all 19 have achieved the same goal: pinning on their new rank as second lieutenants in the U.S. Army. 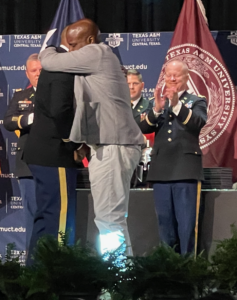 2nd Lt. Tiarion Alverson hugs his father, former Navy Petty Officer Andre Alverson, after they exchanged the “Silver Salute” during a commissioning ceremony by Texas A&M University – Central Texas in Killeen, Texas, May 13. Each of the 19 new officers presented a silver dollar to the first person to render a salute to them, a long-standing tradition in the military. (U.S. Army photo by Dave Larsen, Fort Hood Public Affairs)