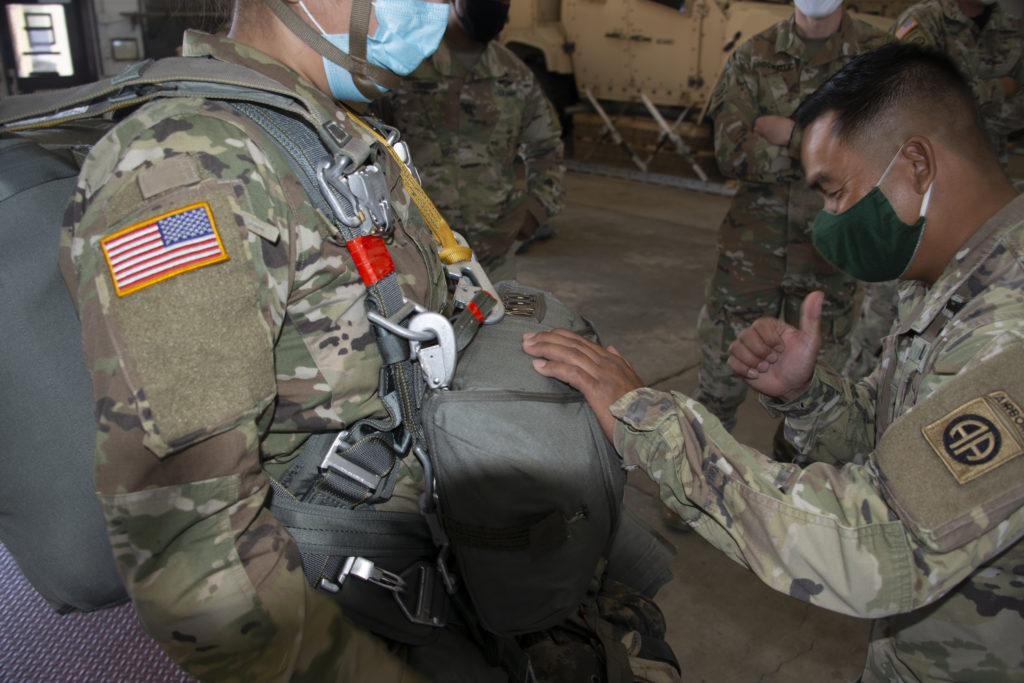 The Airborne and Special Operations Test Directorate (ABNSOTD) tested the chute from both rotary winged and fixed winged high performance aircraft to eliminate the potential for premature reserve activations.

Any necessary changes were made to address the previous version’s premature activation thought to be caused by wind blast, according to Lt. Col. Derek Johnson Chief, Test Division at ABNSOTD.

“Testing promotes and delivers a safe, and more durable piece of equipment to the Warfighter,” said Johnson. “Soldiers relish in participating in day-to day testing. It ignites their enthusiasm to rig and load a piece of equipment which will ultimately serve our future Soldiers during combat missions.”

While employing a host of risk reduction measures to ensure potential test items are safe and effective from the intended user’s standpoint, test events with the T-11R kicked off with new equipment training.

Parachute Riggers participated in New Equipment Training to learn the assembly of the chutes new components and closing of the pack tray.

“There is a huge increase in the amount of information that is provided to Soldiers who are given the opportunity to practice what they are learning in the form of hands-on training,” said Mrs. Shonda Strother, editor with ABNSOTD.

All airdrop test iterations were airdropped with Soldiers in full combat equipment as if they were jumping into a combat operation.

“The T-11R Single Pin reserve parachutes were then inspected for any damage in order to make sure they can hold up to the high demands of the airborne mission,” said Sgt. 1st Class Katherine Greene, ABNSOTD’s T-11R test noncommissioned in charge.

The new T-11R Single Pin pack tray is manufactured from the same materiel as the current issue item. The current T-11R version has a square shaped look while the redesign has a rectangle shape.

The re-designed pack tray includes a change where the reserve ripcord handle is now a single pin pull, and a change in the geometry of the reserve handle eliminates the risk of windblast.

The Fort Bragg, North Carolina-based ABNSOTD plans, executes, and reports on operational tests and field experiments of Airborne and Special Operations Forces equipment, procedures, aerial delivery and air transportation systems in order to provide key operational data for the continued development and fielding of doctrine, systems or equipment to the Warfighter.

The U.S. Army Operational Test Command is based at West Fort Hood, Texas, and its mission is about ensuring that systems developed are effective in a Soldier’s hands and suitable for the environments in which Soldiers train and fight. Test units and their Soldiers provide feedback, by offering input to improve upon existing and future systems with which Soldiers will ultimately use to train and fight.