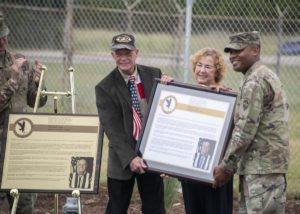 A Lampasas resident was honored as the latest inductee to the U.S. Army Operational Test Command’s Operational Testers’ Hall of Fame on West Fort Hood Oct. 8. During the 26th annual event, William “Bill” Ralph Fesler entered the HOF as the program’s 41st inductee. “Bill took on some of this command’s toughest tests while assigned to our command,” John Diem, OTC’s executive director, said.“His deep understanding of what it means to be an operational tester, alone and unafraid at some site somewhere across the world — he mentored new test officers, he counseled them, and he helped them as they planned and prepared for tests and gave them the benefit of his experiences.” The 76-year-old Amarillo native enlisted in the Army after his 1962 graduation from Dumas High School in Dumas. He first served as an airborne parachute rigger, then as an infantry officer, then as an Army aviator with two tours in Vietnam, and retired as a logistics lieutenant colonel at OTC’s Personnel and Logistics Directorate 29 years later.