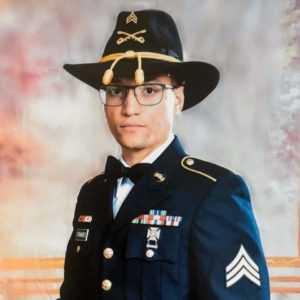 Sgt. Elder Fernandes, 23, whose home of record is listed as Brockton, Mass., was found near Lake Polk in Temple.  He entered the Army in September 2016 as a chemical, biological, radiological, and nuclear specialist and has been assigned to the 553rd Combat Sustainment Support Battalion (CSSB), 1st Sustainment Brigade, 1st Cavalry Division since April 2019.

“The Wagonmaster Family is heartbroken with the news of Sgt. Fernandes’ passing,” said Col. Patrick Disney, commander of the 1st Cav. Div. Sust. Bde.   “Since his absence was reported, we have made a significant, concerted effort to search for him throughout Central Texas. We are grateful for the outpouring of support and assistance we received as we worked to find him. We send our deepest and most heartfelt condolences to his Family and friends.”

Fernandes was last seen in Killeen on Aug 17.   When he was reported absent on Aug. 18, Soldiers from his unit initiated a thorough search for him, both on and off post while cooperating with the Killeen Police Department and U.S. Army Criminal Investigation Command (CID) in an attempt to find him.  The unit distributed his photograph, searched motorpools, parking lots, barracks, and headquarters buildings.  Members of his unit visited local hotels and hospitals throughout Central Texas trying to find him as they expanded their search efforts.

The unit is cooperating with local authorities from the cities of Killeen and Temple as this incident remains under investigation.

The Division will continue to support the Fernandes Family during this difficult time and requests everyone respects their privacy during this time of grief.