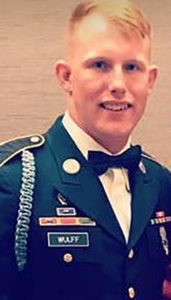 FORT HOOD, Texas – Fort Hood officials have released the name of a Soldier who was found unresponsive in his Fort Hood residence Feb. 28. The Soldier was transported to Scott & White Hospital and died March 3.

Wulff deployed in support of the Republic of Korea from February through October 2016.

Circumstances surrounding this incident are under investigation.