Brillhart received the medal for injuries sustained during combat operations in Somalia exactly two years ago to the date.

Despite being wounded, then Maj. Brillhart provided medical care and evacuation to U.S. and partner forces wounded after being ambushed with small arms fire and a vehicle born explosive device detonating 50 meters from their position. After providing initial care for the wounded, Brillhart and his team manned fighting positions for an additional 72 hours, inflicting heavy losses on enemy forces.

The CRDAMC command team, staff, and Brillhart’s family were excited to see him receive the medal.

“Lt. Col. Brillhart is an outstanding instructor and clinician who contributes to our Emergency Medicine Residency, Graduate Military Education Program, and Advanced Emergency Ultrasound Fellowship,” said Col. Daniel Moore, CRDAMC commander. “Dan has also been a primary instructor at our Joint Emergency Medicine Exercise, leveraging his extensive combat medicine experience. I am very confident in the skills of Lt. Col. Brillhart and appreciate his dedication to the Army and to Army Medicine.”

The JEMX is CRDAMC’s premier medical exercise. JEMX 2022 trained over 2,000 services members from 70 units representing over 60 medical specialties and multi-national medical personnel. Brillhart helped establish the exercise in 2018 and has been one of the primary officers in charge of training every year since its inception.

Brillhart and his team endured stiff enemy resistance while manning the fighting positions during the attack and providing medical treatment to over two dozen friendly casualties, which ultimately allowing the element to fight their way back to friendly lines without further losses.

“The men that I served with out there on the ground, they were there, and it was a day that I had trained my whole life for,” said Brillhart. “What I didn’t know at the time was that surviving that day, wasn’t the only thing, it was that you were going to have to survive that day for every day thereafter.”

Brillhart went on to thank his wife Karen, “an unending source of support,” his children, Olivia, Nate and Cooper, “who are a never-ending source of inspiration,” as well as his friends and colleagues who have supported and encouraged him throughout the years. 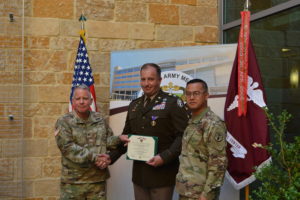 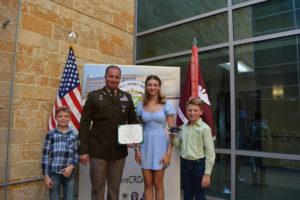