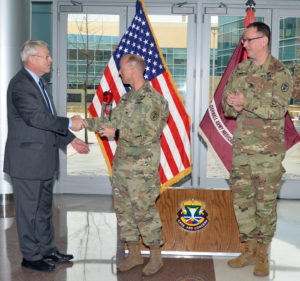 From left, Potter, Gibson and Col. Derek Linklater, CRDAMC director of graduate education. CRDAMC was selected for the annual award for its teaching, clinical and administrative role in shaping the Military Health System’s next generation of physicians, advanced practice nurses and scientists.