Nurses have treated American Soldiers throughout our nation’s conflicts since the Revolutionary War, but it was not until 1901 that the Army Nurse Corps officially became a permanent Corps in the Army Medical Department.

“The Army Nurse Corps has played a significant part in the readiness of our forces no matter the location or circumstances throughout our nation’s great history,” said Col. David Gibson, CRDAMC commander, as he recognized the Corps for its 118 years of service. “Today, as we prepare to care for our Soldiers in a highly complex environment, the expeditionary skill sets that have been honed by prior ANC officers of the past, will sustain our forces through any conflict or operation that may arise.”

This year’s birthday theme “Anywhere… Anytime…Always Ready!” exemplifies Army nurses’ commitment to go anywhere, at anytime to operate in all realms for whatever the mission requires.

“The role that nurses play in healthcare is truly vast and diverse. We provide care anywhere—within clinics and hospitals, on the battlefield, in the workplace and out in the environment,” said Col. Jana Nohrenberg, CRDAMC’s deputy commander for Inpatient Services. “Plus, we provide all different types of care. There’s a nurse for practically every aspect of healthcare such as critical care, labor and delivery, behavioral health, medical-surgical, public health and occupational health.”

In addition to direct in- or out-patient care services, nurses influence healthcare through a variety of administrative roles, according to Nohrenberg. Nurses can be found in many departments throughout the hospital serving as analysts, case workers, instructors, data entry and administrators.

Capt. Hollye Cottle, a medical surgical nurse by background chose a Health Care Administration career path to prepare her for leadership roles. She now serves as a nurse methods analyst for in-patient services and discovered that she actually likes working with numbers and measuring data trends.

“I work with the Workload Management System for Nursing to track the hours that nurses spend on patient care. And then analyze the information to make sure that we have adequate staffing where it’s needed and reallocating resources in other areas as determined,” Cottle said. “Initially the nurses balk at having to enter so much information in the computer and see it as just a lot of numbers and graphs. But once I show them how all that data ultimately helps make it easier for them to do their jobs, they’re appreciative. Knowing that I’ve helped them in some way, makes it worthwhile for me.”

That commitment to helping others is ingrained in nurses, Nohrenberg said. Whether nurses practice direct patient care or serve in administrative roles, and no matter what specialty they work in, the patient is always at the center of everything they do.

“It’s just in their nature. Nurses tend to be very analytical. They look at situations from different perspectives and look for the best solution, whether that problem is a clinical or an administrative. They bring a unique set of skills to each of those environments, always looking for the best way to help someone,” Nohrenberg said. “Nurses have been doing that for over a hundred years and will continue to do so for the next hundred years and beyond.” 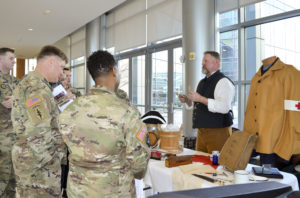