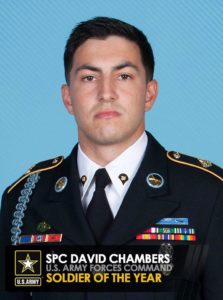 It’s been a busy year for Spc. David Chambers, who was named the Army’s Soldier of the Year during a luncheon at the Association of the U.S. Army’s Annual Meeting and Exposition in Washington, D.C. Monday, before being promoted to sergeant after serving a mere 15 months in the Army.