Troopers from the 1st Cavalry Division Horse Cavalry Detachment perform a ‘Cavalry Charge’ at the 3rd Armored Brigade Combat Team’s change of command ceremony. The purpose of the Cavalry Charge during the ceremony is a way to honor the historic roots of the 1CD. 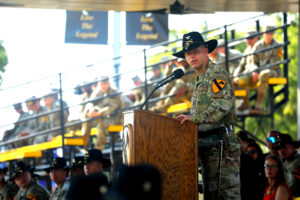 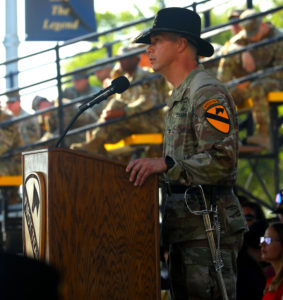 The outgoing commander for the 3rd Armored Brigade Combat Team, Col. Justin Y. Reese,  says his final goodbyes to the soldiers of 3ABCT during the change of command ceremony. Col. Reese relinquished command to Col. John B. Gilliam after 2 years in command. 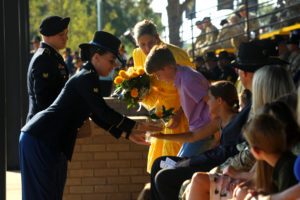 Troopers from the 3rd Armored Brigade Combat Team deliver gifts to the incoming commander, Col. John B. Gilliam’s family, during the 3ABCT change of command ceremony. The gifts were a way to welcome Col. Guilliam and his family to the unit. 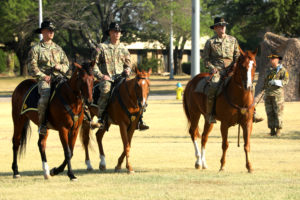 “The list of accomplishments in the Greywolf Brigade are endless,” said Maj. Gen. John B. Richardson IV, 1st Cavalry Division commanding general as he praised Reese for commanding the brigade through one of the most successful National Training Center rotations in recent history. “This brigade took the fight to the 11th Armored Battalion Regiment, relentlessly pursuing the opposing forces with an authentic spirit of the CAV.”

During Reeses’ command, he led the brigade through challenging times including transitions in leadership, COVID-19, and the integration of modern war fighting vehicles and equipment. He will relocate to Grafenwoehr, Germany this summer where he will take command of the 7th Army Training Center.

Reese was tasked with building well-trained cohesive teams at the squad, platoon, and company levels across the Greywolf brigade. Last March, Reese led the brigade through a rigorous NTC rotation where they were able to test their combined arms capability using new vehicles and equipment including the M1A2 SEPV3 Abrams tanks and JLTVs.

“Col. Reese produced the most aggressive and tactically proficient battalion task forces I have ever witnessed at the NTC in my 31 years of war fighting, said Richardson. “He provided a positive command climate that grew adaptive leaders who displayed that agility and home station training at NTC.”

“To the officers, NCOs, and Troopers of Greywolf, I am proud to have had the privilege to hang with the pack,” said Reese as he addressed the unit for the final time. “You are really good at what you are supposed to be good at. You are ready to do whatever the nation asks of you. Trust each other, have confidence in each other, and never forget your sacred responsibility to each other. With all my heart, thank you for your continued service.”

Following the official change of command ceremony, the brigade and its battalions cased their colors in preparation for the upcoming deployment in support of Europe Command. Gilliam will be charged with deploying 3ABCT to Europe to support NATO allies and partners.

“It’s your individual and collective task to create great moments,” said Gilliam, “Show our allies how strong and effective a well-led ABCT can be and show our adversaries the folly of testing the U.S. Army. It will be a hell of a ride, and I look forward to serving with each of you.”

The 3rd Armored Brigade Combat Team, 1st Cavalry Division, “GREYWOLF,” was first established on 29 August 1917 and fought in major campaigns of World War II and the Vietnam War- receiving multiple battle streamers and honors over those decades. In 1996, the brigade became the U.S. Army’s first, no-notice brigade-sized deployment to Kuwait in support of Operation Desert Strike, and during the Global War on Terrorism, GREYWOLF deployed five times to Iraq. Most recently, while stationed at Fort Hood, Texas, the Brigade has trained continuously for the full spectrum of conflict and worked extensively with Allies and partners overseas. Today, the GREYWOLF Brigade is trained, disciplined, and ready to deploy anywhere in the world with the most modern armor vehicles and equipment in the U.S. Army inventory.