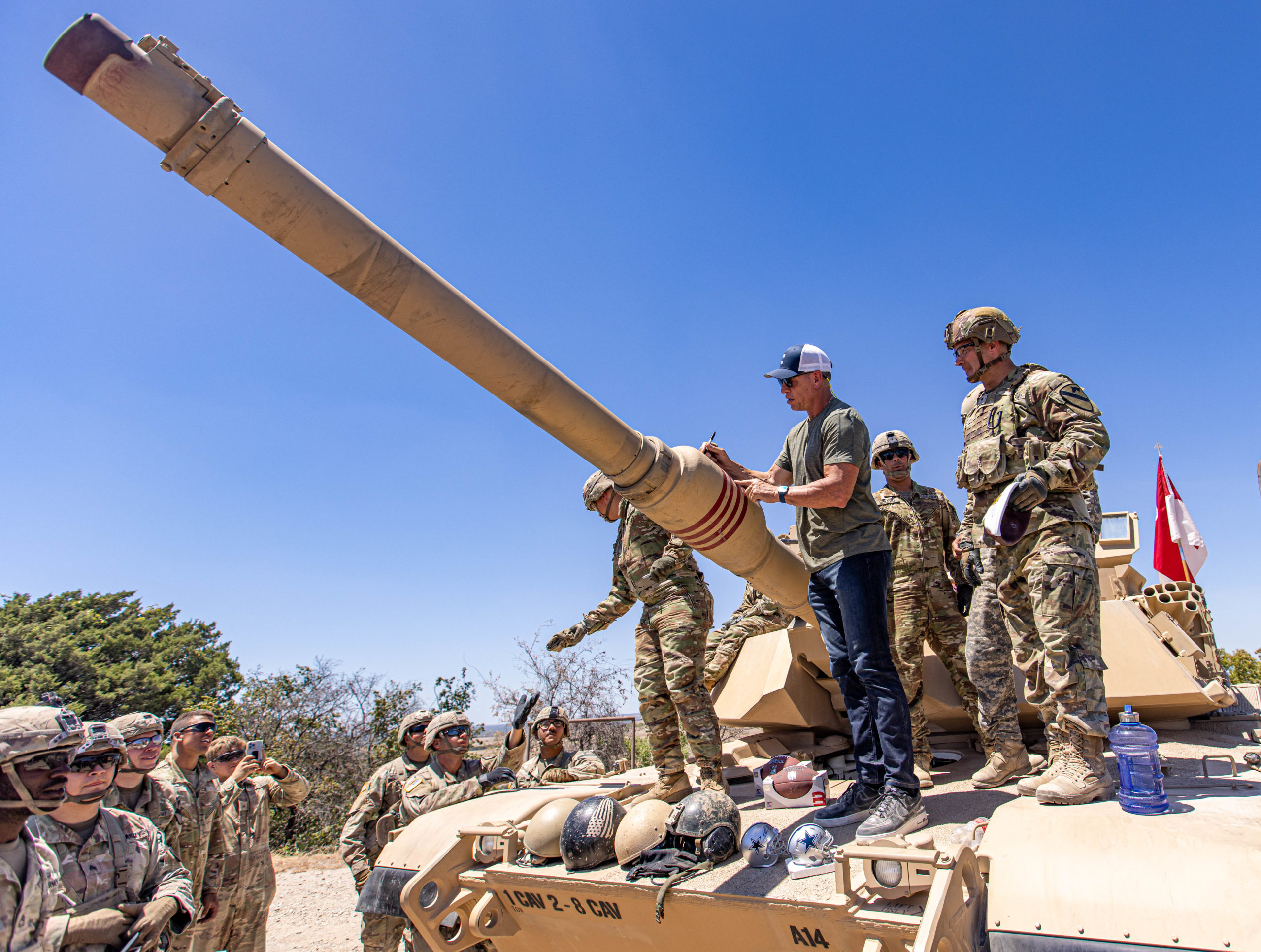 FORT HOOD, TX – The First Team hosted Troy Aikman, former National Football League quarterback, to give a glimpse of what our Troopers do during his visit to Fort Hood, Texas on July 26.

“This is the chance of a lifetime,” said Aikman. “I have never had the opportunity to fly in a military helicopter, ride in a tank and hangout with CAV Soldiers.”

During his visit, Aikman was able to fly in a Blackhawk with Troopers assigned to the 1st Cavalry Division, watch from the tower as 2nd Battalion, 8th Cavalry Regiment tankers showcased their skills as they qualified at Blackwell Multiuse range and even had the opportunity to assist a crew as they shot a round in the most modern tank in the Army; the Abrams M1A2 SEPv3.

“He was very excited to see what it takes to be a part of a tank crew,” said Sgt. 1st Class Timothy C. Sensel, 1st Cavalry Division Abrams master gunner as he discussed mentoring Aikman at the gunnery. “He gave us the fire command and we were able to successfully destroy the enemy target.”

Aikman was gifted the case base of the round that he and the crew fired together so that he can always remember to Live the Legend.

“These Soldiers are the heartbeat of America and the real heroes,” continued Aikman. “We often use those terms in athletics but these men and women are the ones who truly make it happen for us. Until you actually go to a base and speak to them and hear their stories, it helps put their lives in perspective. I have the utmost respect for them and I think it has gone up even more just being around them.”

Aikman spoke with the Soldiers and First Team leaders, sharing experiences of comradery and teamwork.

“We appreciate Troy Aikman taking the time to visit the First Team and motivating our Troopers,” said Brig. Gen. Steven P. Carpenter, 1st Cavalry Division deputy commanding general of maneuver. “He saw a glimpse of what it takes to train and build teams in the most lethal armored formation on the face of the earth. Those Troopers conducted gunnery in 105 degree heat over the last three weeks, and to have a three-time Super Bowl Champion and Hall of Famer refer to them as “his heroes” was extremely impactful.  They will never forget the experience.”

After renaming one of the tanks ‘Aikman’ he bid farewell to all of the Troopers.

“It is really great to be here,” concluded Aikman. “Thank you for allowing me to be here, it is an honor to see the brave men and women who really make it happen for our country. Thank you for all that you do. Meeting the Soldiers who are fans of many teams made me realize that the great thing about the military, is that all of you are on one team. It is the same team that I played for – the United States. It feels good to have Soldiers like you represent our country.”

Aikman is a former American football quarterback who played in the National Football League (NFL) for 12 seasons with the Dallas Cowboys. After transferring from Oklahoma, he won the Davey O’Brien Award at UCLA and was selected first overall by the Cowboys in the 1989 NFL Draft. As the Cowboys’ longest-tenured quarterback, Aikman received six Pro Bowl selections and won three Super Bowl titles from 1992 to 1995. He was also named MVP of Super Bowl XXVII. He was inducted into the Pro Football Hall of Fame in 2006 and the College Football Hall of Fame in 2008.