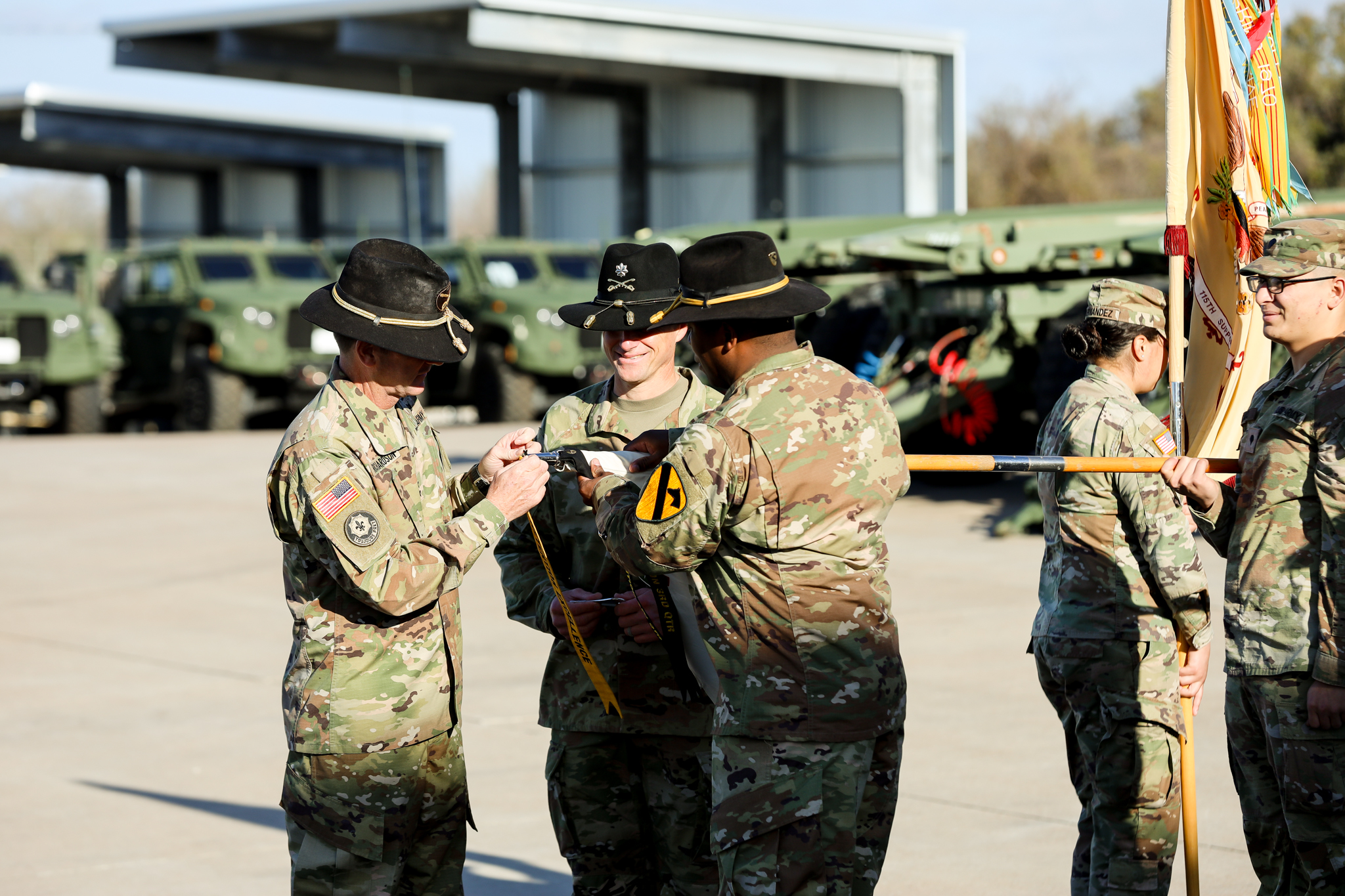 “Earning this streamer says a lot about this organization and that your retention numbers are off of the chart,” said Maj. Gen. John B. Richardson IV, 1st Cavalry Division commanding general as recognized the 115th Brigade Support Battalion as the top 1st Cavalry Division unit for excelling in their fiscal year 2022 retention goals during a streamer ceremony on March 28. “There are great things going on in this battalion with this many Troopers wanting to reenlist and stay in the U.S. Army.”
U.S. Army photo by Staff Sgt. Ashley Dotson, 1st Cavalry Division Public Affairs

“Earning this streamer says a lot about this organization and that your retention numbers are off of the chart,” said Richardson. “There are great things going on in this battalion with this many Troopers wanting to reenlist and stay in the U.S. Army.”

Richardson has sparked change within the division as he has brought back many traditions such as streamer ceremonies to highlight the hard work and dedication of the Troopers within the organization.

“These streamers are people,” Richardson said. “When we neglect to maintain our colors and streamers, we are not just missing some historical artifact, but are disregarding the personal element and stories of those who serve. Highlighting these encounters help us to build cohesive teams and develop a sense of being part of something bigger than one’s self. ”

Richardson takes pride in ensuring that all units within the division receive their streamers to build cohesion, lift morale, inspire pride and learn valuable lessons.

“As a Command Sgt. Maj., it is a great feeling to see Soldiers who want to reenlist and get the assignments that they want,” said Command Sgt. Maj. Brenda Andrade, 115th Brigade Support Battalion command sergeant major. “It allows us to provide them something they want as well as maintain talent management throughout the Army. As much as I would like to keep them all in my formations, sending them to different posts is always a great feeling because you know that you’re sending great Soldiers to those organizations.”

“I have many Soldiers who want to stay at the 1st Cavalry Division and Fort Hood who like what they do here or some who chose to PCS to be closer to their families,” said Mercado. “For me, it is about helping our Soldiers go do what makes them happy and meeting their goals.

Mercado is only part of the larger picture when it comes to taking care of the unit’s Troopers with reenlistments. High retention rates is a reflection on the quality of leadership within the unit.

“Receiving this award as a top producer in the 1st Cavalry Division is extremely important and it makes me feel really proud,” Andrade concluded. “We will continue to re-enlist Soldiers and it is a great feeling to see that these Soldiers are wanting to continue serving their country.”

As part of the People First strategy, the Army is focused on retaining professional, talented Soldiers to increase readiness across the force to fight and win in future conflicts.