The first concert is scheduled for 19 December, at 7 p.m. at the Grace Christian Center in Killeen.

The second is scheduled for 20 December at 7 p.m. at the Lea Ledger Auditorium in Copperas Cove.

Media are invited to attend. If you RSVP we will look for you at the event and facilitate interviews for you.

Media can RSVP to Lt. Col. Christopher Brautigam at christopher.r.brautigam.mil@mail.mil no later than 4 p.m. Thursday the 19th. 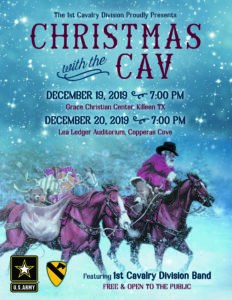