FORT HOOD, Texas — The Headquarters of the Department of the Army’s Logistics office has approved for the permanent implementation of a new culinary initiative to maximize the feeding of soldiers and improve dining flexibility, with Fort Hood being one of the first to experience it. Culinary Outpost kiosks, as these facilities are called, have the appearance and function like a civilian convenience store. The major difference is, like in a dining facility, customers use their Basic Daily Food Allowance to purchase to purchase individual.

Soldiers seem to like it. “If everyone gets off for lunch at the same time, going through here is a lot faster,” said Private 1st Class Devin Keener of C company, 2nd battalion, 5th Cavalry Regiment, 1st Cavalry Division. “It’s a little bit quicker that eating at the [dining facility.] I don’t like sitting down. I have a lot of stuff I want to do. It helps me get back to the tanks so we can get out sooner.” He said he enjoys that it’s similar to shopping at the Express convenience stores but that his Basic Allowance for Sustenance pays for it.

Fort Hood’s kiosk is called “The Culinary Outpost,” and operates independently yet in the same building as 1st Cavalry Division’s Ironhorse Dining Facility. It is one of three that began their experimental phase in November of 2020. On June 13 ,of this year, the pilot program ended and the test locations here, Joint Base Lewis-McChord, and Fort Bragg became permanent. A new facility is being opened for service members in Daegu, Republic of Korea.

2nd Lt. John Suarez, a platoon leader for 553rd Field Feeding company said he understands why the Army saw a need. “There’s a bottleneck inside the [dining facility]. Everybody is held up in line, and there’s a set time for that. How the kiosk solves that is having extended business hours where they can come in, grab what they need, get back to the fight. Or they can come back later on to grab a snack. Because they’re working 24/7, and we can’t allot our time from twelve to one for lunch and have everybody come in all at the same time. So that’s what we’re trying to solve with the kiosk.”

Initially, the Army contracted with a civilian vendor. Wallace said their catalogue of items was not meeting the demands of the customer base. The facility has since transitioned to direct ordering from the Commissary using their curbside delivery system.

“We were continuously trying to refine the process where we’d just order a small amount just to prevent waste, but then we weren’t meeting the intent to provide for the soldiers because their were days when we didn’t have subsistence. COVID brought additional struggles with the prime vendor having difficulties finding distributors to maintain the inventory,” said Wallace.

Yet Wallace had a continual dialogue with high-level decision-makers. She said she kept notes for what the soldiers liked and what they were asking, and Joint Culinary Center of Excellence (J.C.C.o.E.) listened. With J.C.C.o.E. and recommendations from the Army, they decided to purchase inventory directly from Fort Hood’s commissaries to improve quality and selection. Wallace said anything the commissaries produce at their delis can be sold at the kiosk. “And we don’t have to worry about short expiration dates because it’s right down the street, five minutes away.” She said that the change in vendor spiked demand, which was purely by word of mouth. The kiosk does not advertise.

“The price point in the [dining facility] is the same as here. Six dollars and ten cents is what they pay there, and the six items they get here match that cost,” said Wallace. “They can take one item from each category and they can’t deviate to make sure they meet that entitlement they’re supposed to get.” The categories include an entrée, a side, a dairy item, a beverage, a snack, and dessert.

“They give you good portions to get you through the day,” said Private 1st Class Keener. “As long as they can keep this open and don’t ever shut it down, that’d be nice.” 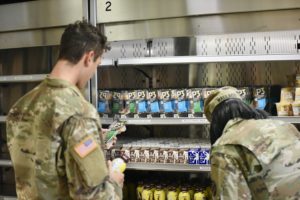 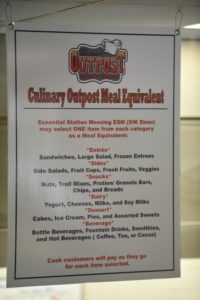 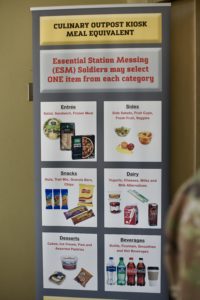