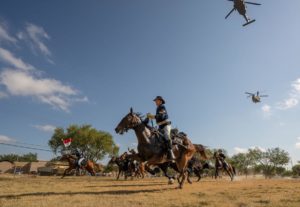 The 1st Cavalry Division’s Horse Cavalry Detachment competed against dozens of military and civilian horse cavalry detachments during the 2019 National Cavalry Competition at Fort Reno, Oklahoma, bringing home two first place wins, as well as several other ribbons. The U.S. Cavalry Association hosted the annual event from Sept. 25-28, with riders competing against one another in several dozen categories. Despite taking three “green” mules and horses, who had never competed before, Capt. Jenny Nocella, commander of the detachment, is happy with the results and so are the detachment’s big finishers.