FORT HOOD, Texas – When last week’s severe weather conditions left families and the vulnerable in need, Soldiers from across the 61st Quartermaster Battalion, 13th Expeditionary Sustainment Command used their time and resources to care for their neighbors and each other.

When 1st Sgt. Michael Baker, the First Sergeant for the 53rd Quartermaster Company, lost power, his family moved into their travel trailer for warmth, but many in his neighborhood were not so fortunate.

“Three families on my block were not so lucky,” Baker explained. “I told my wife that we have plenty of trees on our land, so I bought a chain saw and went to cutting down trees.”

Baker not only shared the wood with these three families, but also one of his Soldiers who lived nearby. Upon hearing during an online meeting with another First Sergeant, who was out of town, that her family was also without power, Baker cut down another tree.

Baker’s wife, Xiomara, also brought meals each day to an elderly lady in their neighborhood so that she could have hot meals.

“We have always had a tight community where we live,” Baker reflects. “I have known the families in my neighborhood since 2011, and we have always looked after one another.”

Staff Sgt. Joshua Markgraf from the 418th Transportation Company, also stepped up to assist families without electricity. Since he and his wife, Liliana, still had power and water, they invited four families into their home until power was restored.

“My neighborhood in Harker Heights didn’t lose electricity or water,” stated Markgraf, “so my wife and I invited the families to stay with us to keep warm until their homes were safe.”

As food in the Markgraf home began to quickly disappear, Liliana headed to the store and spoke with the manager at the neighborhood Walmart in Harker Heights to be allowed to exceed the milk limit in order not only to provide for their house guests, but also for a few mothers with toddlers that she knew were without, and delivered it to them that evening.

Because the city garbage pickup was suspended due to the weather, Markgraf’s trash piled up quickly with his additional guests. He not only hauled his trash to the city dump, but picked up the trash of an elderly neighbor as well.

“We helped these families, because I believe they would do the same for mine,” Markgraf explained.

1st Lt. Kyle Hrncir, the Executive Officer for the 53rd Petroleum Support Company, also opened his home to three families and their total of six dogs. One of Hrncir’s guests was his company commander, Capt. Bryan Miller.

“1st Lt. Hrncir not only fed all of the families, but the entertained children,” explained Miller. “His selfless service of taking in that many people under this extraordinary situation exemplifies that Kyle takes ‘people first’ to the utmost.”

Hrncir’s house also served as the command and control node for the company as he was one of a few key leaders that hadn’t lost electricity and internet connectivity.

“1st Lt. Hrncir was also in contact with the rest of those in the company to ensure that if they lost power that ‘Hostel Hrncir’ was available to them and their families” remarked Miller. “I am truly proud to have him on my team!”

Fort Hood and the III Armored Corps are proud to provide support to the community, especially in times of need.

“This is what we do,” explains Baker. “The Army grooms us not to think about ourselves but to help those in need, our battle buddies. I saw this as nothing else but doing what has been instilled in me from my family values and the Army’s values.” 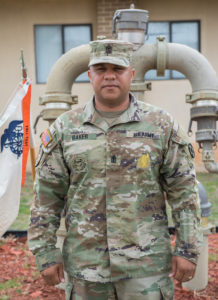