Throughout the rest of the test, they provided feedback on the system during operationally realistic missions, including Call for Fire (CFF), Reconnaissance, Quick Reaction Force (QRF) and Medical Evacuation (MEDVAC) in a GPS degraded environment.

He said he is glad to see the Army is working to develop an answer to such threats.

MAPS is designed to support command and control by replacing the need for multiple GPS devices on a single platform, and it also helps to mitigate EW attacks with an onboard anti-EW antenna.

The system aligns with the Army Futures Command (AFC)-directed requirement to prepare for tomorrow by providing overmatch in multi-domain operational environments.

As the Army’s only independent operational tester, enlists the “Total Army” (Active, National Guard, and Reserve) when testing Army, joint, and multi-service warfighting systems in realistic operational environments, using typical Soldiers to determine whether the systems are effective, suitable, and survivable. OTC is required by public law to test major systems before they are fielded to its ultimate customer — the American Soldier.

The upgrade is part of an ongoing Housing Improvement Plan to increase the quality of life for Soldiers and their families here.

FORT HOOD, Texas — Fort Hood officials do not suspect foul play in the death of Spc. Maxwell Hockin, who was found unresponsive Oct. 9 outside his company barracks.

An investigation by the U.S. Army Criminal Investigation Division is ongoing to determine the circumstances surrounding his death.

Spc. Maxwell Hockin, 26, who was assigned to 1st Armored Brigade Combat Team, 1st Cavalry Division, entered the Army in March 2017 as a combat engineer. Hockin had been assigned to the 91st Engineer Battalion, here, since July 2017.

“The entire Saber family is devastated by the loss of our true teammate and friend Specialist Maxwell Hockin,” said Lt. Col. Patrick Sullivan, commander, 91st Engineer Battalion. “He had an outstanding work ethic and was always willing to help out the team. He will truly be missed. Our thoughts and our prayers are with Maxwell’s family during this difficult time.”

No further information will be released at this time while the investigation is underway.

FORT HOOD, TX- A Soldier assigned to the 1st Cavalry Division was found unresponsive behind his company barracks Oct. 9 here.

More details will be released once all next of kin have been notified. The incident is under investigation.

Sewell is a Fort Hood soldier who failed to report for duty on Oct. 7 and was later confirmed safe with extended family on Oct. 10.

Sewell’s chain of command worked closely with her and her family to help facilitate her safe return to Fort Hood yesterday afternoon, Oct. 11.

Sewell’s leadership and chain of command will continue to provide her access to resources and other tools necessary to thrive as a soldier and continue honorably serving.

The 3d Cavalry Regiment and Fort Hood deeply appreciates the public’s support and quick action to help proliferate initial and follow-up reports regarding this situation.

Fort Hood officials are respecting the family’s privacy and will not provide any further information regarding Pfc. Sewell.

FORT HOOD, Texas — Officials from Fort Hood released the following information Oct. 10 regarding the ongoing efforts to locate Pfc. Jennifer Sewell. Sewell is a Fort Hood soldier who failed to report for duty on Oct. 7.

Sewell’s family confirmed she is safe and with extended family.

Fort Hood officials continue to communicate with Sewell’s family and friends, to ensure she has access to resources she may need and to return her safely to Fort Hood.

“Pfc. Sewell is a valued member of our team, and our number one priority is ensuring her safe return. We are in regular contact with her family and will provide any assistance she and her family may need to return to Fort Hood,” said Ltc. Octavia Davis, commander of Regimental Support Squadron, 3d Cavalry Regiment.

Fort Hood officials are respecting the family’s privacy and will not provide any additional information until the appropriate time.

On Oct. 7, Sewell’s unit reported that she failed to report to work. Attempts to contact Sewell by law enforcement, her chain-of-command and her Family have been unsuccessful.

She does not own a vehicle.

Initial investigation appears that Sewell left for unknown reasons on her own accord.

Sewell was last seen leaving her on-post barracks at approximately 4 p.m. on Oct. 7.

Military officials are in constant contact with Sewell’s unit, her Family and close friends to ensure her health and safety.

Anyone with information related to the location of Sewell or details related to the conditions she went missing should contact the Fort Hood Military Police at (254) 288-1170.

Law enforcement officials will protect the privacy of those who wish to remain anonymous to the degree allowable under law and hold information to the strictest confidence.

If you observe any suspicious activity in your area please contact the Fort Hood Military Police desk at (254) 288-1131. 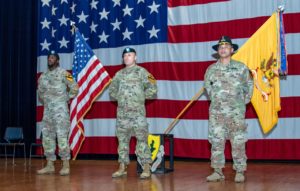 The regiment created the award to recognize the top squadron for meeting or surpassing their retention mission for the year.

Each squadron in the regiment has their own career counselor, and the one to lead the “Muleskinners” to securing their place at the top and the trophy was Staff. Sgt. Jennifer Licata, a native of Mira Loma, California, a confident, caring leader who takes her job seriously as an Army career counselor.

“My senior [career counselor] pulled me in and said our goal was 126, and I said ‘that’s going to happen, definitely at Muleskinner,’ and we exceeded that,” said Licata.

Meeting or surpassing a unit retention goal is no easy fete, yet the “Muleskinners” managed to not only meet their goal, but exceeded it at almost 128%, retaining 147 troopers and securing $164,800 in retention bonuses.

The 3d Cavalry Regiment commander also understands how difficult a task it is to retain troopers and soldiers in the Army.

“We want to recognize the very best of our career counselors and their retention success…it’s one of the toughest jobs in the Army,” he said.

Licata has a unique support system guiding her along her journey as an Army career counselor.

“This was my first squadron as a career counselor, and it was very challenging for me and I couldn’t have done it without my wife,” said Licata.

Licata’s wife is also a career counselor assigned to III Corps and is no stranger to surpassing retention goals. She was named the 2020 Army Career Counselor of the year, beating 19 other competing counselors from across the Army.

Licata’s unit leadership also played an integral role in securing the trophy for their squadron.

“I want to thank my chain of command for their support. I never had any issues and they were always there, 100% of the time if I had any concerns,” said Licata.

Retaining troopers also supports Operation People First initiatives, by working with troopers to find a balance between their needs and the Army’s needs.

Before presenting the trophy to Licata, Bradley said “what you do day in and day out is people first. Folks come into the Army with hopes and dreams, and when they come to you it’s about reconciling what’s out there with those hopes and dreams and those things that are going to keep them and their family part of the Army.”

According to the United States Army Recruiting Command Website, the labor market is challenging due to the Army being an all-volunteer force.

For more information about this story, call 254-423-5741 or email gabriela.s.thompson2.mil@army.mil