FORT HOOD, Texas – The 1st Cavalry Division published a standards book called the “Yellow Book” on June 21 at Fort Hood, Texas to outline standards for both

Troopers and Leaders regarding topics covered in U.S. Army regulations, directives and policies.

“I truly believe this Standards Book will make our great units even better by educating Troopers of what is expected and more importantly, empowering our NCO Corps.” said Maj. Gen. John B. Richardson IV, 1st Cavalry Division commanding general. “We are the greatest Army in the history of the world because of our incredible NCO Corps, the Standard Bearers of our Army.”

The Yellow Book is not a new concept for many that have served across the Army, and it is not even a new concept at Fort Hood. III Armored Corps historically maintained a standards book as well. However, this most recent publication of a standards book includes a non-punitive policy on cell phones for members of the First Team. This policy was designed to protect the off-duty hours of the division’s Troopers and spend uninterrupted time with their families and friends.

The Yellow Book for the 1st Cavalry Division is unique in that it outlines very specific and unique guidelines that do not exist elsewhere. The manual outlines proper wear of the Stetson, spurs, the full-color shoulder sleeve insignia, as well as standards for the proper execution of training within the greater Fort Hood area. Though all leaders are expected to not only uphold, but also enforce these standards, the primary audience for the guide is to empower the Noncommissioned Officers of the First Team.

“Our Non-commissioned Officers are the ‘Backbone’ of the Army and therefore are charged with ensuring that our Troopers uphold the highest of standards; the same standards that make the NCO Corps the most efficient and disciplined force in the Word,” said Command Sgt. Maj. Shade S. Munday, 1st Cavalry Division command sergeant major.

After training sessions led by unit leaders, all available Troopers in the division participated in a check on learning assessment during a division-wide foundational day.

The assessment, while challenging, proved to be no match for the professional knowledge of the Troopers of the CAV. As of publication, the overwhelming majority of Troopers passed the test on their first attempt. A common theme from many junior NCOs was that the new Yellow Book will serve as a great tool as they train and lead small units, teams, and crews in America’s First Team. 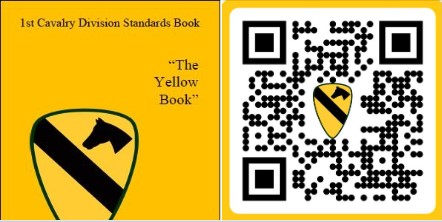 To learn more about the Yellow Book please visit https://www.army.mil/1stcav#org-the-yellow-book