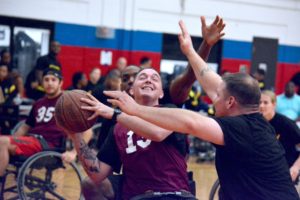 FORT HOOD, Texas –There were no hotshot hoopsters or heroic dunks. Instead, it was a grueling battle of the hoops with every point valiantly earned. When the final buzzard sounded, it was all just numbers on a scoreboard, secondary to a win or a loss. What was really at play during the Warrior Transition Unit’s wheelchair basketball tourney were grit, determination and luck.

“It really gives you an appreciation of the challenges people in wheelchairs have,” said HHC company commander, Capt. Carly Buglino who admits she’s a decent hoopster on a regular basketball court. “It certainly didn’t matter today because in wheelchair basketball you are limited to just using your upper body strength to shoot. It definitely gives you a different perspective on so many things we take for granted.”

“I’m terrible at basketball, but I’m a lot better at wheelchair basketball,” he said, adding that it was the first time he had ever been in a wheelchair. “It’s surprisingly pretty easy to get around on the court, but it’s definitely tough making those baskets.”

Troop Command started strong in its wheelchair basketball debut, but collapsed after numerous missed shots, according to Mehta.

“It’s hard taking a shot since you can’t use your legs,” he said. “We just got tired.”

For Spc. Tyrone Hagans, the basketball event served as an introduction to his days ahead in the WTU.

“I was just expecting to go to appointments,” he said. “Something like this is amazing and so unexpected. It really puts a smile on my face.”

Wheelchair basketball is part of the Military Adaptive Sports Program that provides reconditioning activities and competitive athletic opportunities to wounded, ill and injured service members to improve their physical and mental quality of life through recovery and transitioning. Developed by World War II veterans, wheelchair basketball is an official Paralympic sport.

Although the WTU regularly holds company scrimmages, this was Troop Command’s first exposure to a Paralympic sport.

“It was an eye-opening experience for my Soldiers,” said Lt. Col. Scott Stokoe, Troop Command commander. “Playing really helped them understand and appreciate the complexity of participating in an even like wheelchair basketball.

The competitive collaboration between the two units also helped Stokoe and his Soldier athletes gain an insight into the WTU program.

“Even though a win would have been great,” he said, “but what was more important is that my Soldiers really gained an appreciation for some of the challenges and opportunities afforded WTU Solders.”

Although wheelchair basketball is just one component of the WTU’s Military Adaptive Reconditioning Program (MARP), the activities all contribute to the healing and transitioning of Fort Hood’s wounded, ill and injured Soldiers.

“It’s all about troop and medical readiness,” said Capt. Michael Cooper, commander, B Co., WTU. “We have some Soldiers trying to get back into the fight and some transitioning out. The WTU allows these Soldiers to take a knee, but at the same time continue to meet the standards of the Army and focus on their transition.”