Baby Rowen made his debut at 6:09 a.m. weighing in at 6 lbs. 10 oz.  In Baby New Year fashion, young Medrano was showered with well wishes and gifts including a hamper filled with blue clothes, toys, layette items and a diaper cake.

CRDAMC’s command team visited the newest addition to the Army family to offer congratulations.  Col. David R. Gibson, CRDAMC commander, was enthusiastic about carrying on the tradition of visiting the New Year’s baby.

“Each birth at CRDAMC is special and the team here does an outstanding job of providing exceptional care and support to every single patient,” Gibson said.  “We’re certainly excited to participate in the tradition of welcoming the first baby of the New Year.  Command Sgt. Maj. Brunell and I are honored to share in the joy of this day with the family.”

Basking in the glow of joy and happiness the couple looks forward to enjoying time with Rowen and the host of family members who were on hand for the birth from as far away as Arizona.  The new mother’s face beamed as she listened to her family members share their excitement about Rowen’s arrival.   “They’re so proud, and I’m happy,” she said.

Delivering exceptional care to every patient every single time certainly proved true for the labor and delivery teams who supported four other deliveries including a set of twins on Jan. 1.

“We actually had three deliveries before 9 a.m.,” 1st Lt. Caitlin Oconner, mother baby unit charge nurse said. “Does that mean we got first, second, and third?”

Oconner’s excitement is typical of CRDAMC’s maternal child health nursing team members who are always ready to support families during on one of the most memorable days of their lives. 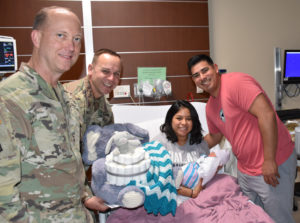