Six Soldiers competed in an eight-event, two-day competition, which included a combat water survival test, day and night land navigation, a combatives tournament and a ruck march. The two will go on to compete in the Medical Readiness Command-West Best Medic Competition in October.

“Just two days ago, I had the honor of presenting Lt. Col. Dan Brillhart with the Purple Heart medal that he earned for his actions in combat,” said Col. Daniel Moore, commander CRDAMC. “The skill sets that you guys are demonstrating are the skill sets that we use outside of this facility to serve the fighting strength of our Army, so this is a great example of that.”

Hubbard described various ways to prepare for the physical aspect of the event. Like throwing on a 35 lb. plus backpack and running around through the neighborhood with his wife, Ericka, or throwing his 6-year-old daughter, Hazel, and 2-year-old son, Alastor, over his shoulders and picking up their electronic four-wheeler when they’re not working. “So I got a kid on my shoulder, a ruck sack and then a four-wheeler in my hand just trying to get after it as much as I can,” he said.

Hubbard worked as cadre, led best medic competitions in organizations in the past, and says the events are ingrained in his mind.

Now, he and Perdue will move on to represent CRDAMC at the Medical Readiness Command-West Best Medic Competition; and Hubbard is expecting it to be tough.

“I expect to be way more painful than this competition,” he said. “This competition is just the tip of the iceberg when it comes to those levels of competition. I expect myself and the captain to really have to push it harder. There are going to be a lot more competitors out there and folks that have done enough to win at their organization. So it’s going to be a bit tougher to go out with a bunch of folks that have already proven themselves out there in the competition.” 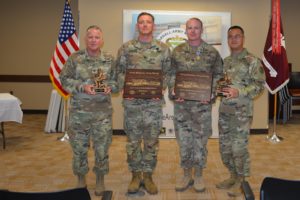