Brigade commander Col. Reggie Harper officiated the change of command as approximately 400 Soldiers looked on from the formation and bleachers.

“I cannot overstate the pride, admiration and respect for this battalion and Nick’s leadership of it,” stated Harper. “The Cold Steel battalion has benefitted from his leadership. It shows in all they do from phase maintenance to ground maintenance and bulk distribution and first-class signal support for our mission command nodes across the brigade.”

Ryan, whose spouse is also an Army aviator of the same rank, says he is most proud of the stellar reputation the Soldiers have earned across the brigade and 1st Cavalry Division during his command.

“The Soldiers of the Cold Steel battalion have continuously proven their reputation as an organization that knows what it means to support,” Ryan boasted from the podium. “These Soldiers have always met the need at the right time and place to generate combat power and extend the operational reach of the Air Cav Brigade whenever and wherever it was necessary.”

The culture and the swagger that cavalry Troopers carry with them is something he says he will miss. During an award presentation before the official change of command to recognize the outgoing commander, Ryan expressed his appreciation to his colleagues and Soldiers, describing the unit as a “family.”

Ryan will return home to prepare for his next assignment as a student at the U.S. National War College in Washington, D.C.

LTC Jacqueline Stillwell joins the 1st Air Cavalry Brigade from the Future Vertical Lift Cross-Functional Team, US Army Futures Command at Redstone Arsenal, Ala. where she served as the Future Long-Range Assault Aircraft Lead and G-3 plans/requirements officer from Sept. 2018 to April 2022.

“Since arriving in theater, I am already so proud to see our team of teams here, at Combined Resolve and elsewhere, generating combat power and sustaining operational reach while supporting our sister units and Allies,” said Stillwell during her remarks. “Our mission is incredibly important and even more so with ongoing world events.”

Stillwell is no rookie to the air cavalry lifestyle.

After graduation from flight school she was assigned to the 4-6th Air Cavalry Squadron at Joint Base Lewis-McChord, Wash., serving as the flight operations officer in charge. In 2007, she deployed as a UH-60L platoon leader to Tal Afar, Iraq, for a 15-month deployment.

Later she served as the executive officer for the 3-17th Cavalry, Heavy Attack Reconnaissance Squadron, and for 3-17th CAV, Task Force Lighthorse during the 2017-2018 deployment to Afghanistan, where TF Lighthorse conducted split-based operations across Jalalabad Airfield, Dahlke and Chapman.

The 1st Air Cavalry Brigade will be replaced later this year by the 1st Armored Division Combat Aviation Brigade from Fort Bliss, Texas to support the United States’ commitment to Atlantic Resolve. 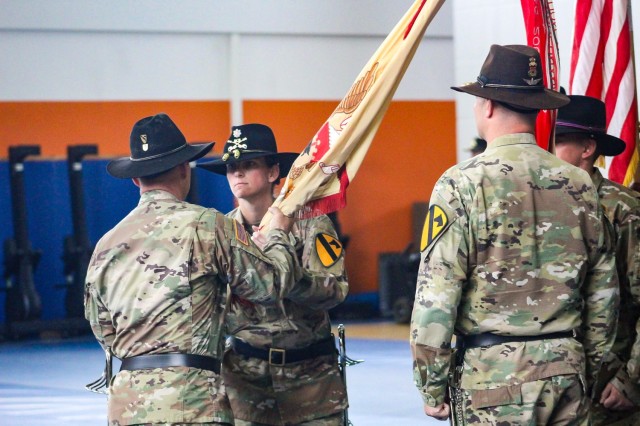