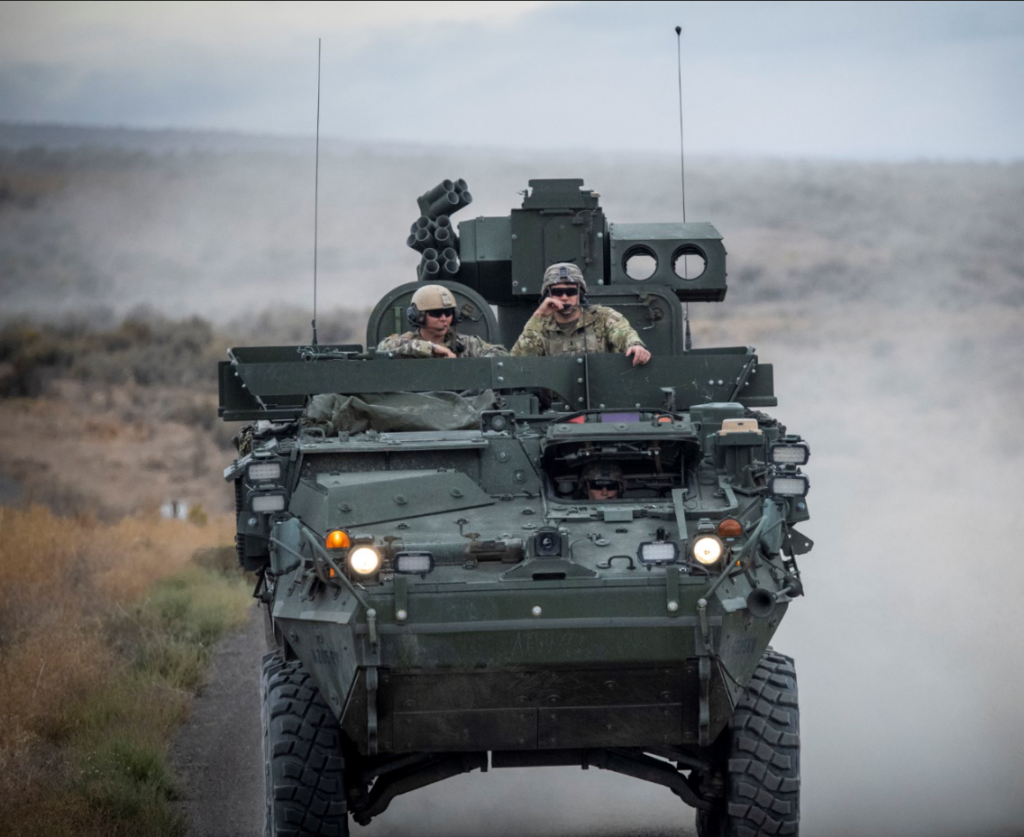 “The ability to create a route or develop an engagement area and share amongst the platoon increases the Stryker’s operational effectiveness.”

He emphasized the engineering change is a long-awaited upgrade within the Stryker ATGM community.

Network lethality allows each Stryker to act as a sensor by transmitting situational reports and images within the Platoon, Company, and Brigade.

The pFTL integrates with the laser range finder, which allows for greater accuracy and precision while detecting enemy targets.

The networked lethality also enables and allows the ATGM vehicles to increase their tactical dispersion within the limits of the terrain, explained Thomas.

Optical enhancements provide the ATGM gunner with improvements for detecting, recognizing, and identifying targets at greater ranges and with more clarity.

Since July, four months into the COVID-19 Pandemic, the Soldiers and crews of “Dog” Troop have been training and gaining proficiencies on operating the new Stryker ATGM vehicle at Joint Base Lewis-McCord (JBLM).

After training and certification, the troop deployed to Yakima Training Center, which was the first time Soldiers traveled outside the immediate JBLM area since restrictions to movement went into effect from the pandemic.

“After completing the operational test, Delta Troop may be the most trained and ready ATGM crews in the U.S. Army,” said Lt. Col. Brian Caldwell, another OTC test officer.

Despite the environmental and health threats and risks, the testers and Soldiers of “Dog” Troop took meticulous safety precautions to protect all personnel.

“The perseverance and discipline of all involved ensured the health safety and prevention of infection at the test site,” said Caldwell. “Deploying to Yakima was a high risk because it appeared to be the location with the highest infection rates in the state.”

Before the start of the record test phase, “Dog” Troop conducted a live-fire exercise engaging static targets out to multiple distances.

“This was easily one of the best Stryker ATGM training events I have witnessed since being assigned to 8-1 CAV,” said 1st Lt. Alexander Windmiller, Delta Troop Executive Officer.

After completing their tactical missions, every Soldier submitted feedback to OTC test officers.

Operational testing began Oct. 1, 1969, and as the Army’s only independent operational tester, the U.S. Army Operational Test Command taps the “Total Army” (Active, National Guard, and Reserve) when testing Army, joint, and multi-service warfighting systems in realistic operational environments, using typical Soldiers to determine whether the systems are effective, suitable, and survivable. OTC is required by public law to test major systems before they are fielded to its ultimate customer – the American Soldier.

The Maneuver Test Directorate (MTD), based at Fort Hood, Texas, is OTC’s lead directorate for conducting independent operational testing of Infantry, Armor, and robotic systems to inform acquisition and fielding decisions for the Army and select joint Warfighting systems. Poised, ready, and always able, MTD has and will remain the “go to” test directorate to provide the Army Futures Command and senior U.S. Army leadership with truthful test feedback they need to make informed decisions as to what capabilities will be brought to bear against future adversaries in a Multi-Domain Battle environment.