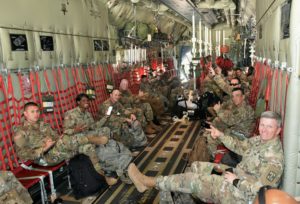 The 9th Hospital Center deployed the first wave of medical Soldiers Mar.25, 2020 from Fort Hood, Texas heading to Fort Dix, New Jersey, where they will begin augmenting the medical professionals in the New York City area in the fight against COVID-19. These units plan and train year-round and remain ready to provide defense support of civil authorities to help protect the American people during man-made and natural disasters. U.S. Army photos by Capt. Tyson Friar, 13th ESC Public Affairs.

FORT HOOD, Texas – The 1st Medical Brigade has begun deploying personnel to assist the Federal Emergency Management Agency and local officials with the augmented medical support needed to assist in the fight against COVID-19.

More than 25 medical personnel from the 9th Hospital Center deployed today to Fort Dix, near New York City, and will be followed by over 275 in the upcoming days.  Additionally the 627th HC, out of Fort Carson, Colo., deployed over 30 of the near 300 Soldiers they’ll be deploying to Joint Base Lewis- McChord near Seattle, Wash.

These units plan and train year-round and remain ready to provide defense support of civil authorities to help protect the American people during man-made and natural disasters.

“As the United States military’s oldest and largest medical brigade, we stand ready to support the people of the United States in their time of need,” explains Col. Robert Howe, the 1st MED Commander.  “Our Soldiers are eager to provide medical service and support to our fellow citizens and alleviate some of the burden on our tremendous civilian healthcare system.”

The Hospital Centers feature robust medical capabilities as a self-sustaining hospital that remains ready to deploy anywhere in the world.

“We stand ready to deploy wherever our country needs us,” Howe added.

The deploying Soldiers from both units will first supplement the current local medical facilities, and decide how much to grow the scalable Hospital Centers, which can provide medical services ranging from routine care to surgical capabilities with up to 240 hospital beds.

Additionally, the 1st MED Brigade headquarters has been assigned to support the Joint Task Force – Civil Support’s COVID-19 response efforts, and will be leading medical planning operations from Fort Hood.

This response is part of the whole-of-nation approach to fighting COVID-19. The Army is working with interagency partners – including the Federal Emergency Management Agency, the Centers for Disease Control and Prevention, the Department of Defense Military Health System and others – to support and protect our military force and the American people.