The 1st Cavalry Division unveiled Legends Way yesterday in honor of Medal of Honor recipients who served at Fort Hood, Texas. Battalion Avenue, a long-standing road, which runs across the installation, was renamed to honor legends of previous conflicts who served with Fort Hood units.

“The purpose of Legends Way is to teach the younger generation of Troopers our history and for them to learn of legends before us who paved the way for us today,” said Command Sgt. Major Shade S. Munday, Command Sergeant Major, 1CD. “I want them to feel proud and to stop and learn about some of these MoH recipients during their run in the morning as they are out there doing PT with their teams.”

This year, 1CD celebrates its centennial birthday and renaming Battalion Ave. is just one way the division is honoring the legends who once wore the 1CD patch.

“This week is Cav Week and what we are doing this week is celebrating and focusing on building teams and unit pride,” said Richardson. “We scheduled this week alongside the 1CD Association so there will be thousands of veterans coming on post and interacting with our younger generation.”

The division has been working on renaming Battalion Ave. to Legends way for a year and although the project began as a smaller idea to rename just the section of the road that cover the division and it’s subordinate units, III Corps adopted the idea and the entirety of Battalion Ave. has been renamed to allow other units to highlight their heroes.

For any questions, please contact the 1st Cavalry Division Public Affairs Officer via mobile phone at (254) 423-6699 or by email at: jennifer.j.bocanegra.mil@army.mil. 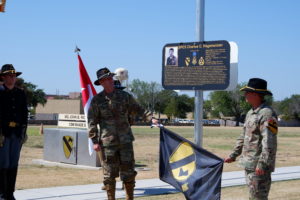 Maj. Gen. John Richardson and Command Sgt. Maj. Shade S. Munday unveil a marker alongside Legends Way which highlights one of 43 Medal of Honor recipients who served with  the 1st Cavalry Division. Legends Way, formerly known as Battalion Ave., runs through the Fort Hood installation and showcases 48 Medal of Honor recipients post-wide. The installation of these markers is a way to connect younger Troopers with the legends who served before them. (Photo by Army Master Sgt. Miriam Espinoza, 1st Cavalry Division Public Affairs Office)