“It is indeed an honor to be back home with America’s First Team to celebrate our centennial where we honor the sacrifice and service of thousands of veterans throughout the history of the First Team who stepped up and served when our nation needed us most,” Malloy said during his remarks. “From our beginning, America’s First Team has fought in every major war since World War II …The sacrifice of our veterans is captured by the 43 Medals of Honor earned by America’s First Team as well as the veterans who have filled our ranks within the past 100 years.”

During the ceremony, the 1st Cav. Div. command team, Maj. Gen. John Richardson, commanding general and Command Sgt. Maj. Shade S. Mundy, division command sergeant major, honored troopers past and present who served with the division over the past 100 years with a recitation of the division’s distinguished history from its origins in September 1921 to present day support of U.S. military operations worldwide. Troopers from 1st Cav. Div.’s six brigades took part in the historical narrative while dressed in period uniforms including equipment from various campaigns that earned 1st Cav. Div.’s reputation as the nation’s premier armored force. Malloy also joined the command team in adding five additional streamers to the 1st Cav. Div. guidon representing the division support towards the Global War on Terrorism.

Veterans, local government leaders, nearby residents and military families came out to view the ceremony and tour interactive displays of vehicles and equipment stationed along the recently renamed Legends Way and at the 1st Cav. Div. museum.

This morning’s ceremony served as a grand finale wrapping up CAV Week, which ran from Sept. 20th thru 24th. Throughout the week, 1st Cav. Div. troopers participated in a variety of activities including a four-mile division run and team and individual sports competitions. The division command team also unveiled newly renamed Legends Way road.

For the remainder of this month, Richardson authorized 1st Cav. Div. troopers in a memo to wear the 1st Calvary Division Color Patch along with the CAV hat and spurs to inspire unit pride and build the Cavalry elan in the First Team. The division will continue to honor its 100-year legacy throughout the year during key observances and events.

The 1st Cavalry Division, also known as America’s First Team, was formally activated on September 13, 1921 at Fort Bliss, Texas and has distinguished itself during every major conflict since World War II. Today, more than 20,000 troopers serve within the 1st Cav. Div. ranks remaining ready to fight and win anywhere in the world. 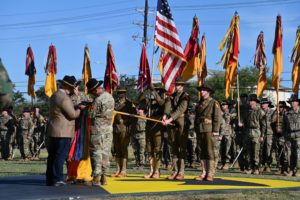